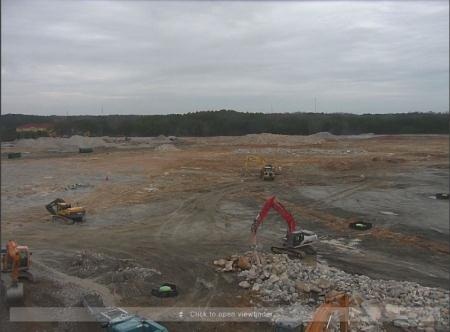 Click HERE to view progress on the film and television studio facility at the former Shannon Mall site!

Rooker, which purchased the 90-acre property in February 2014, will be the Developer and General Contractor of the studio complex, named Atlanta Metro Studios. 404 Studio Partners, led by a team of film and television production professionals, including a former Turner Entertainment Group producer and the former President of Physical Production at Universal Studios, will be the exclusive sales, marketing and operations management company for the studio facilities.

“We couldn’t be happier to have one of the largest studio facilities in the state call Union City
home,” said Mayor Vince Williams. “Today is about a city rising and partnering with the private sector to bring new jobs and new opportunities to our community’s front door. We are grateful to Rooker and 404 Studio Partners for their vision and the catalyst they have provided in driving additional retail and restaurant options for the people of Union City. The City Council and I have been extremely eager to bring high-quality development to the site, and this initiative will be an excellent addition to the growing base of businesses in Union City.”

“Production companies are picking Georgia because we have the entire package – a business- friendly environment, statewide accessibility, diverse locations and a skilled crew base,” said Rooker Teams with 404 Studio Partners to Develop Film and Television Studio Facility

Governor Nathan Deal. “This new Union City complex will include a state-of-the art studio facility as well as 1.1 million-square-foot distribution center to support the region’s growing demand for a logistics hub. Georgia is one of the fastest growing entertainment production centers in the nation and facilities such as this one will play a vital role in long-term infrastructure growth.”

Added Chris Carr, Commissioner of the Georgia Department of Economic Development: “The film industry is a powerful economic generator in Georgia – creating jobs and investment opportunities across the state. Not only will Atlanta Metro Studios generate jobs, it will also ensure the industry’s sustainability by creating new infrastructure to meet the growing need for studio space.”

404 Studio Partners has designed the studio facility specifically to accommodate large-scale film and television productions. The company is led by Ed Richardson (Founder & CEO), the owner of R&R Productions Worldwide, a Georgia-based production company, and an independent film and television producer; Brian Livesay (CEO), the co-founder of Radish Lighting LLC, which has working relationships with major film and television production studios across the U.S.; John A. Brubaker, (Founding Partner), third-generation film professional with more than 28 years of production experience; and James D. Brubaker (Founding Partner), the former President of Physical Production at Universal Studios and film producer credited with some of the industry's highest-grossing films.

“Georgia offers the film and television industry a number of key advantages, including production tax incentives, strong state and city leaders who are committed to promoting the industry, and a growing infrastructure and workforce,” said Richardson. “Atlanta Metro Studios will provide large-scale film and television content creators the additional benefits of a purpose- built studio facility, a central location only five minutes from Hartsfield-Jackson Atlanta International Airport and less than 20 minutes from Midtown Atlanta, and a marketing and management team with extensive industry knowledge and experience.”

Livesay added, “404 Studio Partners is proud to partner with Rooker for this studio development. It's also very exciting to be able to build a studio facility within an established community – Union City – that provides producers and film crews convenient access to restaurants, stores, hotels, banks and more."

Demolition of the Shannon Mall buildings is under way. Vertical construction of both the studio facility and the distribution building will begin March 1, 2015, with completion expected in fourth- quarter 2015. Located off Jonesboro Road adjacent to Interstate 85 in South Fulton County, the project offers excellent visibility from the highway.

“This is an opportunity for Rooker to partner with an experienced team of film and television
production professionals to build something much larger and impactful to the community than we initially envisioned for the site,” said John Rooker, CEO of Rooker. “At the same time, we’re thrilled to participate in a project that will bring economic development and hundreds of jobs to Union City while meeting the need for high-quality distribution space in a prime location near Hartsfield-Jackson International Airport.”

Shannon Mall, which at its peak featured a total of 95 stores, closed in November 2010. In addition to state tax credits specifically targeted to the film and television industry, the redevelopment is eligible to receive Opportunity Zone tax savings of up to $3,500 per job created. It is also eligible for incentives through the Union City Tax Allocation District, an incentive plan geared toward redevelopment and infrastructure improvements.

About Rooker Rooker is a full-service real estate development, design and construction firm specializing in the industrial, office and government segments. Rooker helps companies in the manufacturing, warehousing and distribution sectors with everything required to build a new facility. As a developer of business parks, Rooker has extensive experience working with state and local development authorities. Rooker has been successful, in part, due to its innovative, unique financial partnership arrangements that help local authorities to build business parks to stimulate local economies without burdening those authorities with large up-front investments.