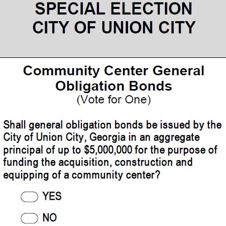 On Tuesday, November 8, 2016, the citizens of Union City will have the opportunity to vote regarding a proposed community center bond.  The bond referendum will be used for funding the acquisition, construction and equipping of a community center.

What is a Bond Referendum?
A bond referendum is a voting process that gives voters the power to decide if a municipality should be authorized to raise funds through the sale of bonds. A general obligation (G.O.) bond is a long-term borrowing option that pledges the City’s full faith and credit (taxing power) to repay the debt over a specific term.

How much would the city issue in bonds?
If citizens vote in favor of the bond financing question on the November 8 ballot, the City will have the authority to issue up to $5 million in general obligation (G.O.) bonds.